These properties can be well understood with help of a stress-strain diagram (Given below). The Stress-Strain diagram is plotted with the help of a tensile test. 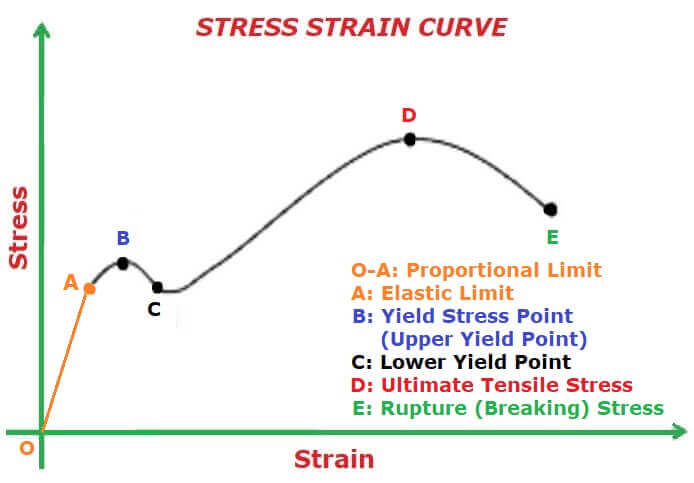 Now we shall discuss the 13 different mechanical properties of materials;

The capacity of resisting external loads by metal and to withstand destruction under the action of external loads against these stresses is known as strength.

The stronger the material, the greater the load it can withstand this property of material, therefore, determines the ability to withstand stress without failure.

When the external forces are removed it can also be referred to as the power of the material to come back to its original position after deformation. It can be used as an important application for building precision instruments like Springs or structures etc.

3) PLASTICITY: Plasticity is defined as the property of material under which the material is not able to regain its original shape even after the removal of the load i.e. the material permanently gets deformed.

In other words, It is the ability or tendency of a material to undergo some degree of permanent deformation without its failure.

Plastic deformation takes place only after the elastic limit of material has been exceeded. This property is important in forming, shaping, extruding and many other hot or cold working processes materials such as clay lead, etc are plastic at room temperature and steel is plastic at forging temperature this property generally increases with an increase in temperature of materials.

This property of the material is required in forging in stamping images on coins and in on mental work.

4) DUCTILITY: Ductility is termed as the property of a material that enables it to be drawn into the thin wire with the application of tensile load.

The ductility is usually measured in terms of percentage elongation and percent reduction in the area which are often used as empirical measures of ductility.

In general, materials that possess more than 5% elongation are called as ductile materials

5) MALLEABILITY: Malleability is the ability of the material which enables it to be flattened into thin sheets under applications of heavy compressive forces without cracking (by hot or cold working), which means it is a special case of ductility which permits materials to be rolled or hammered into thin sheets.

A malleable material should be plastic but it is not essential to be so strong.

6) BRITTLENESS: Brittleness is the opposite of ductility. It is the property of breaking of a material with little permanent distortion the materials having less than 5% elongation and the loading behavior are said to be brittle materials.

Material that suffers slight or very less deformation and the load has a high degree of stiffness or rigidity for instance suspended beams of steel and aluminum may both be strong enough to carry the required load but the aluminum beam will sag or deflect further which means the steel beam is stiffer or more rigid than the aluminum beam.

8) HARDNESS: Hardness is defined as the ability of a metal to cut another metal.

9) CREEP: When a metal part is subjected to high constant stress at a high temperature for a longer period of time it will undergo a slow and permanent deformation which is known as creep. If the material will be continuously subjected to high stresses at higher temperature crack can be formed which may further propagate towards failure called creep failure.

10) FATIGUE: Fatigue is the failure of a material due to cyclic or repeated loading. The intensity of the load may be very less than the ultimate tensile stress, but due to the repeated or cyclic action of the load, the crack initiates and propagates which leads to the fatigue failure.

The fatigue process leads to Macroscopic and microscopic discontinuities (at the crystalline grain scale) as well as component design features that cause stress concentrations (holes, keyways, sharp changes of load direction, etc.) are common locations.

11) RESILIENCE: It is the amount of energy which a body can absorb without permanent deformation.

12) TOUGHNESS: The amount of energy that a material can absorb without breaking is called the toughness of that material. In other words, it is the ability of a material to absorb energy and deform plastically without fracturing.

Difference between toughness and resilience:

Please watch the below video to understand more about the mechanical properties of the materials:

References and for further reading;

This article is written by: