Plasma arc welding (PAW) is an arc welding process in which the heat required for welding is generated by a constricted arc between a non-consumable electrode and the workpiece. 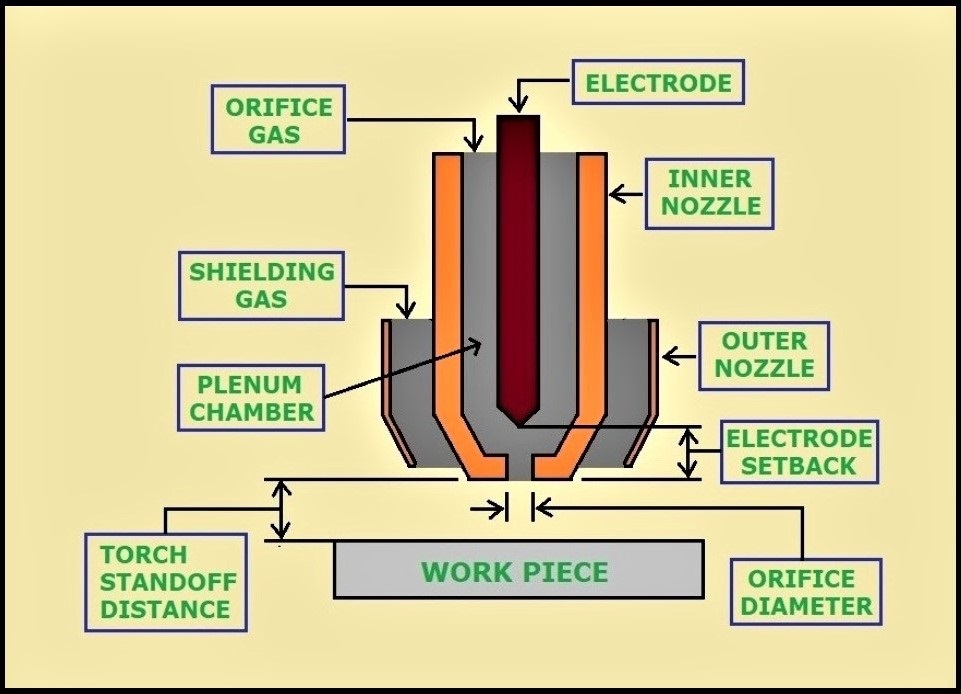 The inner nozzle contains orifice gas which surrounds the electrode. The orifice gas is a neutral gas that gets converted into a plasma state (the fourth state of matter) when an arc is ignited in the chamber. The arc heats the orifice gas to a temperature at which the electrons present in the atoms of orifice gas leave their orbit, due to which, the orifice gas becomes ionized. The ionized gases come out from the orifice of the nozzle as a “plasma jet stream”. Plasma is a good conductor of electricity.

Plasma emanates from the nozzle of the orifice at a temperature of about 16,700°C (30,000°F), creating a narrow, constricted arc pattern that provides excellent directional control and produces a very favorable depth-to-width weld profile.

The outer nozzle contains shielding gas like Gas Tungsten Arc Welding (GTAW). The shielding gas covers the area of arc plasma impingement on the workpiece to avoid contamination of the weld. Shielding gas may be the same as the orifice gas or it may be different from orifice gas.

Electrode Setback: The distance between the tip of the electrode and the face of the constricting nozzle is known as electrode setback (see Figure 1).

Torch Standoff Distance: The distance between the outer face of the constricting nozzle and the workpiece is known as the torch standoff distance (see Figure 1).

Plenum or Plenum Chamber: The space between the inside wall of the constricting nozzle and the electrode is known as the plenum or plenum chamber (see Figure 1).

Power Source: The power source used for plasma arc welding is similar to that used for TIG welding (GTAW). Both GTAW as well as PAW processes use constant-current power sources and a high-frequency source for arc starting.

Plasma Control Console: The crucial control systems of plasma arc welding are encompassed in a plasma console also known as plasma control console or console. The console is generally integrated with the primary power source, but it can also be available as a separate stand-alone unit. A typical plasma control console includes controls for the following;

Shielding gas is often the same as the orifice gas for many plasma arc welding applications. However, some advantages can be observed when a different gas is used for certain applications.

Flow rates for shielding gases are usually in the range of 5 L/min to 15 L/min for low-current applications. For high-current welding, flow rates of 15 L/min to 32 L/min are used.

Coolant System: Plasma Arc Welding requires a cooling system. A cooling system should consist of a coolant reservoir, radiator, pump, flow sensor, and control switches. Corrosion-resistant materials are used for the construction of the liquid-contacting surfaces.

Filler Metal: The filler metal is added externally (if required). In the case of manual welding, filler metal in form of rods is used. Whereas, filler metal in wire form is used for mechanized or robotic welding. Filler metal specification is the same as that used in gas Tungsten Arc Welding (GTAW). To learn more about tungsten electrodes, Please click here.

Two types of arc modes are used in plasma arc welding, these are;

In the non-transferred arc mode, the electrode is connected to one terminal of the power source (generally with negative polarity) and the nozzle is connected with the other terminal (positive terminal). Hence, the arc is established and maintained between the electrode and the constricting orifice. The workpiece remains out of the electrical arc circuit. non-transferred arc mode is suitable for cutting and joining nonconductive materials.