In the Valves Part-1, you learned what is a valve, its history, and its categorization (Click here to read).

In Part-2, you learned about Globe valves (Click here to read).

In Part-3, you learned about Gate valves (Click here to read).

In this, you are going to learn about Plug Valves categorized by design.

Plug valve is a quarter-turn manual valve that uses a cylindrical or tapered plug to permit or prevent straight-through flow through the body. With a full-port design, this opening is the same as the area of the inlet and outlet ports of the valve.

Plug valves can be applied to both On-Off and Throttling services. Plug valves were initially designed to replace gate valves since plug valves by virtue of their quarter-turn action can open and close more easily against flow than a comparable gate valve.

Lubricated plug valve (Figure-1) uses a lubricant usually made up of a base oil and viscosity improver (like amorphous or fumed silica) that is injected under pressure between the plug face and body seat to reduce friction and seal ports. Valve manufacturers generally recommend lubricants suitable for the process fluid, and the valves often must be resealed after only a few cycles, and in some cases, after every cycle. Considered a high maintenance plug valve, they are often used in applications that have infrequent operations. Lubricated plug valves perform well in processes that utilize fluids that carry mildly abrasive particles such as dirty upstream applications, gas pipeline systems that need bypass valves, and blow-down valves on valve stations.

Non-Lubricated Plug Valve (Figure-2) utilizes a tapered or cone-shape that acts as a wedge and presses a polymeric sleeve against the body cavity. The use of the sleeve reduces friction between the plug mechanism and the body.  Non-lubricated plug valves are often used instead of lubricated ones in applications where maintenance needs to be kept to a minimum, such special services in sulfur, hydrogen fluoride, or where liquids could be trapped or solidify and potentially jam the valve. However, non-lubricated plug valves are limited by temperature and chemical compatibility of the non-metallic materials they are made of.

The three main types of non-lubricated plug valves are: 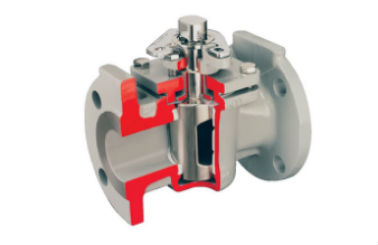 Eccentric Plug Valve (Figure-3) uses a half plug that is advantageous for applications needing a higher seating force with minimal friction from open to closed position. The torque seated valves also feature improved shut off capabilities. Eccentric plug valves are used for a wide range of flow control and isolation applications including clean and dirty water, sewage, sludge and slurries, air, and other services. 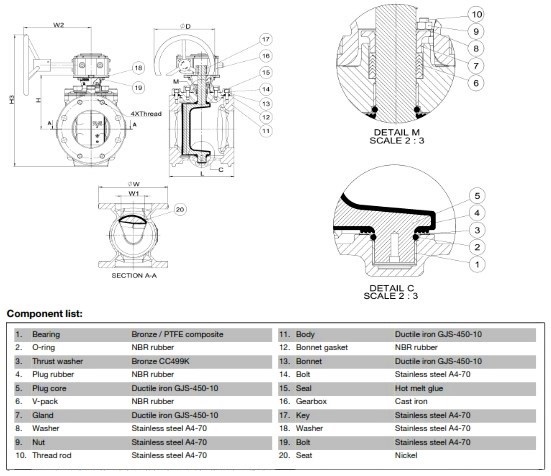 Expanding Plug Valve (Figure-4) uses multiple components that allow the valve to mechanically expand and give it a true double block and bleed function in one valve. The plug valve uses a mechanism that rotates between the open and closed positions and protects both seals from the flow path. During rotation, there is no contact between body and seals, and slips expand onto the body seat when the valve is closed to avoid causing any wear or abrasion to the seals. They are often used to prevent product contamination in applications that do not require double isolation.