A safety valve is a valve that acts as a protection of equipment from exploding or damaging and it is mainly installed in pressure vessels such as chemical plants, electric power boilers, and gas storage tanks.

Reasons for excess pressure in a vessel:

There are a number of reasons why the pressure in a vessel or equipment can exceed a predetermined limit. The most common are: Blocked outlet; Exposure to external fire, often referred to as “Fire Case”; Thermal expansion of fluid; Abnormal process conditions (Chemical reaction); Cooling system failure; Heat exchanger tube rupture; Pipework component failure; Control Valve failure, etc.

Each of the above-listed events may occur individually or simultaneously. Every cause of over-pressure will create a different mass or volume flow to be discharged. For e.g. small mass flow for thermal expansion and large mass flow in case of a chemical reaction. It is the process engineer’s responsibility to determine the most worst-case scenario for the sizing and selection of a suitable pressure safety device. 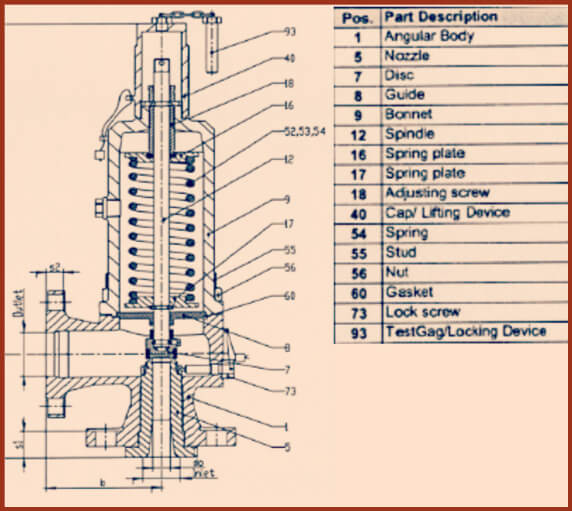 What is the difference between Relief Valve and Safety Valve?

Relief valve: A spring-loaded pressure-relief valve actuated by the static pressure upstream of the valve. The valve opens normally in proportion to the pressure increase over the opening pressure. A relief valve is used primarily with incompressible fluids such as any Liquid.

Safety valve: A spring-loaded pressure-relief valve actuated by the static pressure upstream of the valve and characterized by rapid opening or pop action. A safety valve is normally used with compressible fluids such as any Gases, Steam.

The terms full lift, high lift, and low lift refer to the amount of travel the disc undergoes as it moves from its closed position to the position required to produce the certified discharge capacity, and how this affects the discharge capacity of the valve.

A full lift safety valve is one in which the disc lifts sufficiently so that the curtain area no longer influences the discharge area. The discharge area, and therefore the capacity of the valve are subsequently determined by the bore area. This occurs when the disc lifts a distance of at least a quarter of the bore diameter. A full lift conventional safety valve is often the best choice for general steam applications. A conventional safety Relief Valve is a pressure Relief Valve which has its spring housing vented to the discharge side of the Valve. The operational characteristics (opening pressure, closing pressure, and relieving capacity) are directly affected by changes of the back pressure on the Valve. 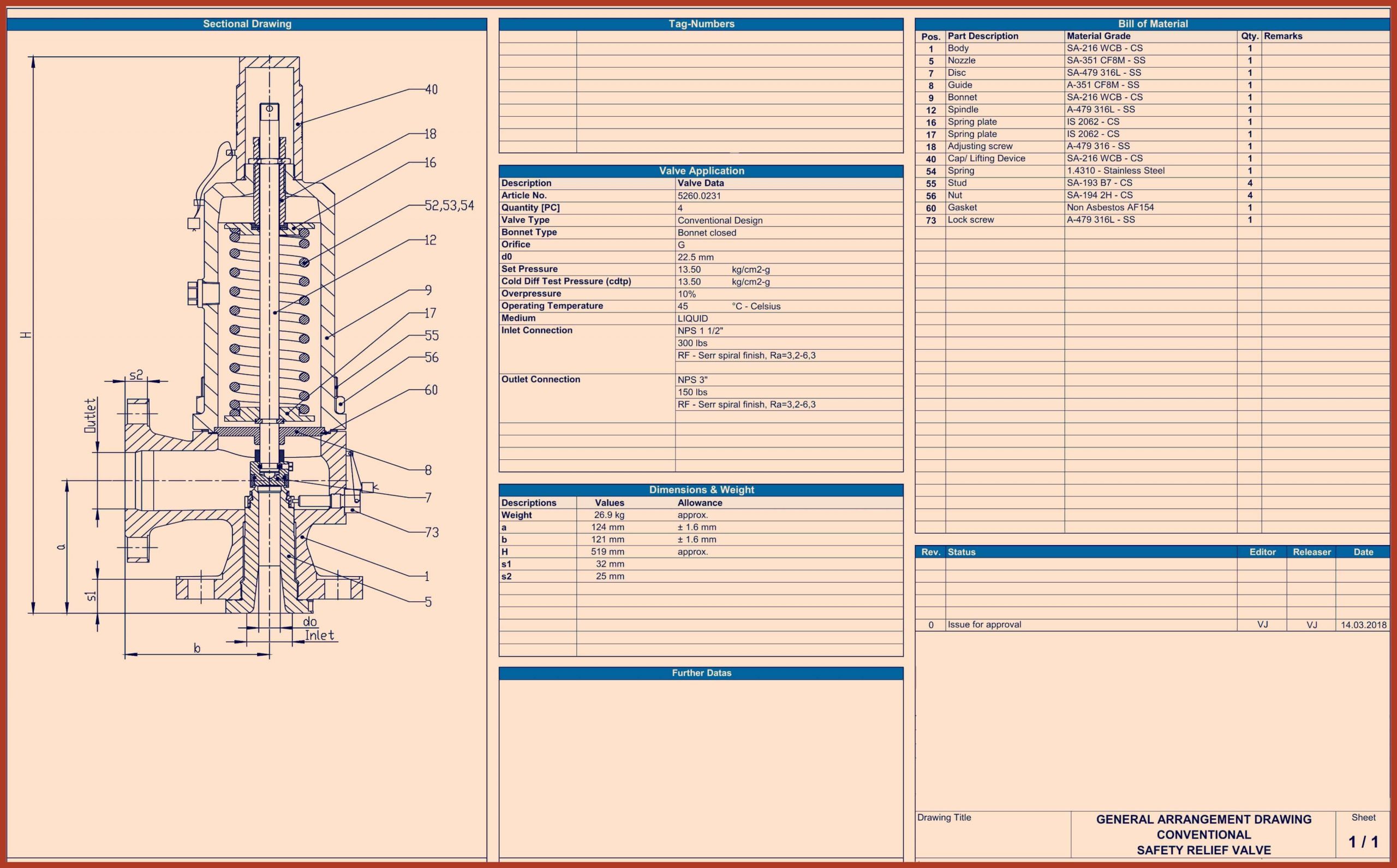 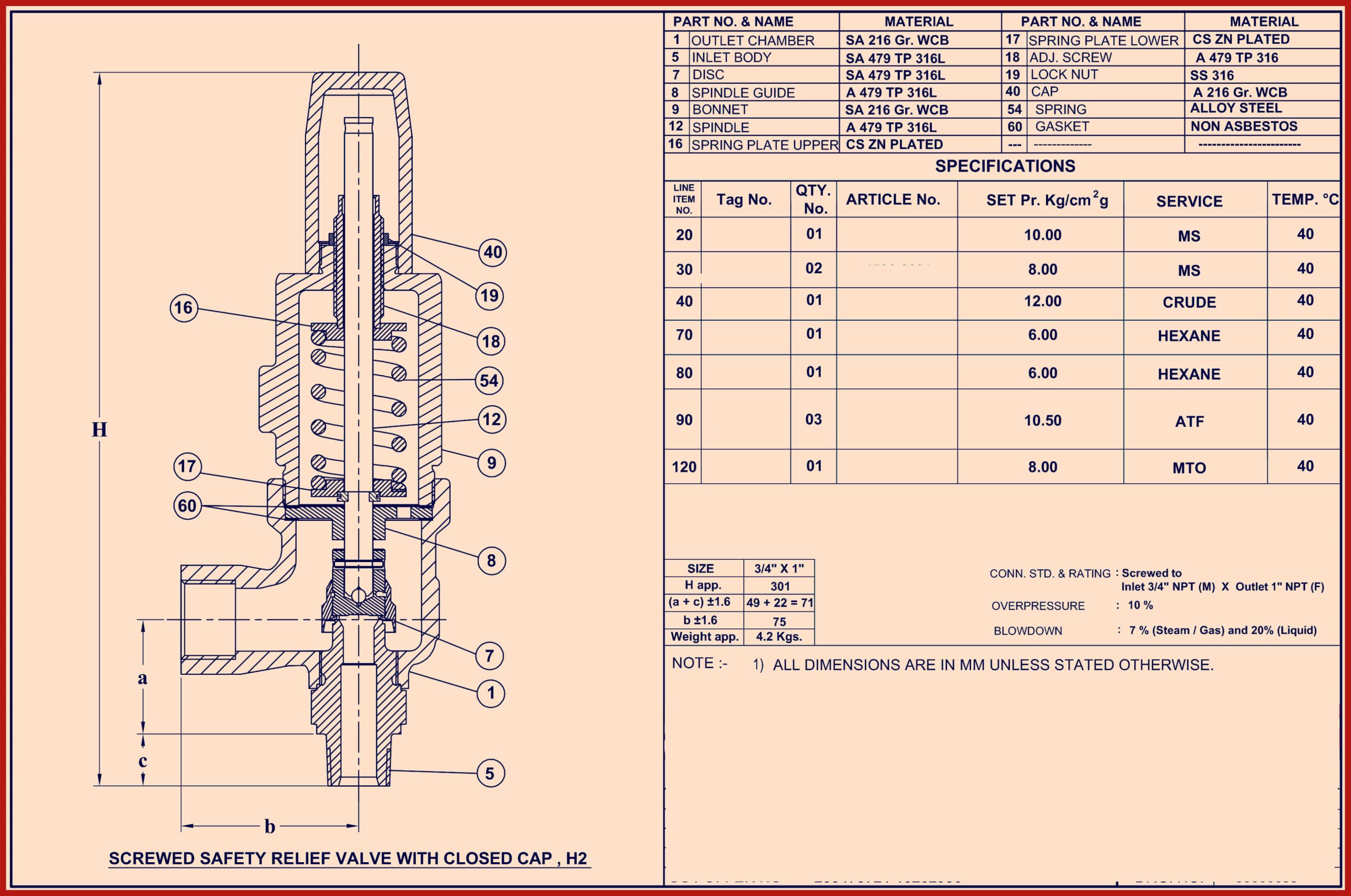 A vacuum Relief Valve is a pressure relief device designed to admit fluid to prevent an excessive internal vacuum; it is designed to reclose and prevent further flow of fluid after normal conditions have been restored.

Accumulation: The pressure increases over the MAWP of the vessel, expressed in pressure units, or as a percentage of MAWP or design pressure. Maximum allowable accumulations are established by applicable codes for emergency operating and fire contingencies.

Actual discharge area or actual orifice area: The area of a pressure-relief valve (PRV) is the minimum net area that determines the flow through a valve.

Backpressure: The pressure that exists at the outlet of a pressure-relief device as a result of the pressure in the discharge system. Backpressure is the sum of the superimposed and built-up backpressures.

Closing pressure: The value of decreasing inlet static pressure at which the valve disc re-establishes contact with the seat or at which lift becomes zero as determined by seeing, feeling, or hearing.

Cold differential test pressure (CDTP): The pressure at which a pressure-relief valve is adjusted to open on the test stand. The CDTP includes corrections for the service conditions of backpressure or temperature or both.

Curtain area: The area of the cylindrical or conical discharge opening between the seating surfaces above the nozzle seat created by the lift of the disc.

Opening pressure: The value of increasing inlet static pressure at which there is a measurable lift of the disc or at which discharge of the fluid becomes continuous, as determined by seeing, feeling, or hearing.

Operating ratio of a pressure-relief valve: The ratio of maximum system operating pressure to the set pressure.

Set pressure: The inlet gauge pressure at which the pressure-relief device is set to open under service conditions.