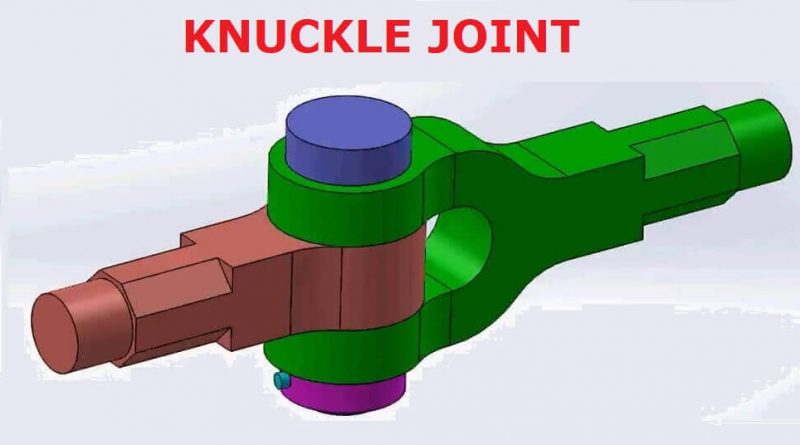 WHAT IS A KNUCKLE JOINT?

A knuckle joint is a type of mechanical joint used to join two components that are loaded under tensile load. One has a fork with holes on either side, forming a double eye, while the other component has a Single eye. The single eye is inserted between double eyes so that all three holes are centered, and a pin is used to secure these components. These joints are used for different types of connections e.g. tie rods, tension links in bridge structure roof tiles, bridges, and cranes, etc. These joints can easily be assembled and dissatisfied. The ability to allow some rotations can be advantageous in truss structures because it ensures that the structural members remain under a net stress load and are not subject to bending moments, which can increase the stress. Now let’s discuss this more clearly;

PARTS OF A KNUCKLE JOINT:

Different parts of a knuckle joint shown in the below figure; 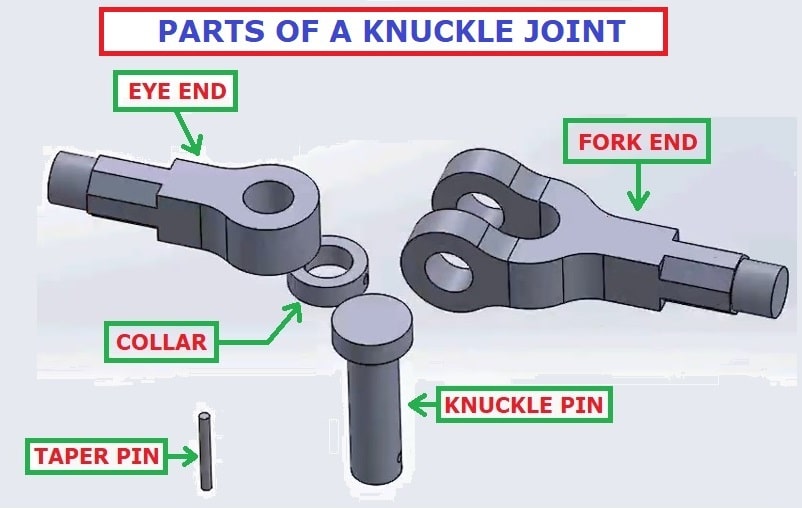 The Assembly of different parts of a knuckle joint is shown in the below figure; 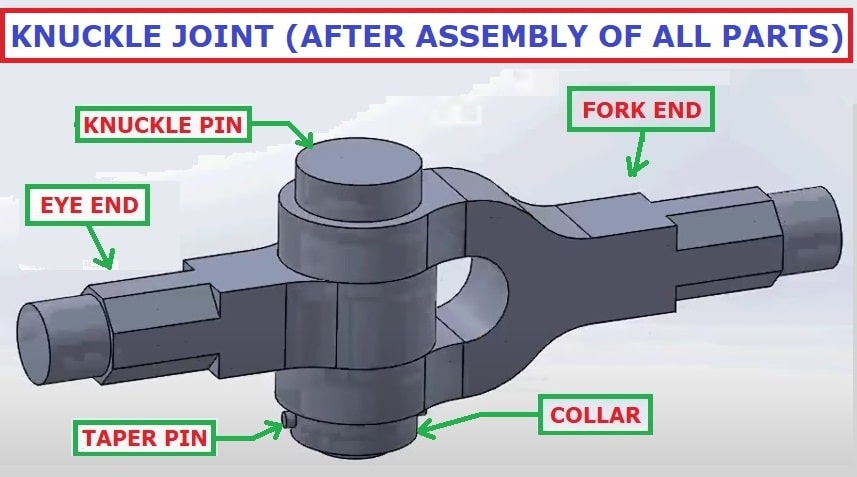 CONSTRUCTION AND FUNCTIONS OF DIFFERENT PARTS:

The arrangement as shown in the above figures has an eye fork end & one eye end. The collar, taper pin & Knuckle pin provides an axial arrangement to these joints. The end of one eye is placed between two eye ends or two eyes of a fork. After that, a nozzle pin is inserted at the end of the eye and the end of the fork. The fork pin is used to hold the fork end and eye end together.

Some part of the knuckle pin comes outside of the lowermost hole of the fork end.

There is a small hole under the knuckle pin, at the ends of the eye, and fork Collar and tamper pins are used to lock the knock pins.

This simplifies the formation of the Knuckle joint, some parts of the knuckle pin comes outside of the lowermost hole of the fork end.

FAILURE OF DIFFERENT PARTS IN A KNUCKLE JOINT:

Types of failures that can occur in knuckle joints are;

4. Pin crushed against the rod Material selection: The material selected is low carbon steel, which can withstand the stresses developed in the material, as the joint is subjected to reversible stress, then the induced stress will be repeated, and the joint may fail due to fatigue.C-30 is selected as the material for all parts

The assembly diagram of the knuckle joint is as shown in the above figure.

The dimensions of knuckle joints are:

Consider the rod is subjected to a direct tensile stress

From the above equation, the diameter of the rod ‘d’ is obtained.

(a) Consider the failure of the pin under double shear due to tensile force.

Therefore, direct shear stress induced in knuckle pin is given by Equation

(b) Failure of knuckle pin in bending

Assume there is no clearance or slack but in actuality, knuckle pin is loose in forks to permit angular moment of one with respect to other, so it is subjected to bending moment in addition to shear, consider uniformly distributed load along the portion of the pin.

Here, we check the pin in bending and find the value of dp

(a) To find the outside diameter of single eye (doe) The single eye is subjected to a direct tensile stress, due to this single eye under the tear.

(b) Due to direct tensile strength, the single eye is subjected to double shear.

The direct shear stress induced is

From this equation, the outside diameter of the single eye doe is obtained.

From this equation crushing stress checked if fail, increase the thickness of the eye (t).

From this equation, find the outside diameter of the fork (dof).

(b) Failure of the double eye (fork) in double shear due to tensile load.

From this equation, check shear stress if less than design, increase the thickness of fork t1.

Double eye may fail in crushing due to tensile load

The following are the main points of knuckle joint applications:-

Followings are the main advantages of knuckle joints:-

Followings are the main disadvantages of knuckle joints:-:-

This article is written by: