ASME Boiler and pressure vessel code (BPVC) has assigned certain numbers to base metals (to be welded) as well as to filler metals (electrodes).

For base metals, ASME has assigned two number system, these are;

For filler metals, the number system which is assigned, are as follows;

These numbers can be found in ASME BPVC Section IX, please see Table–1 for details; 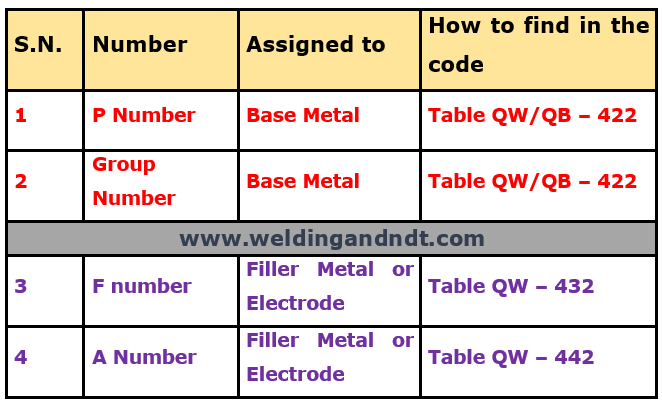 Hence, to reduce these costly and time-consuming activities, ASME has done groupings of base metals and has assigned certain P numbers to each group of metals. This grouping of base metals has been done on the basis of the following parameters;

Though all materials of the same ‘P’ number don’t exhibit the same properties, but after considering the above-mentioned parameters, ASME has done this logical grouping.

Why this grouping is required?

Suppose, if we change the base metal from an existing qualified WPS and if the new base metal falls in the same ‘P’ number then the requalification of the existing WPS is not required, it means no need for a new PQR.

Table–2 shows the assignment groups for various metals and their alloys (according to ASME BPVC). 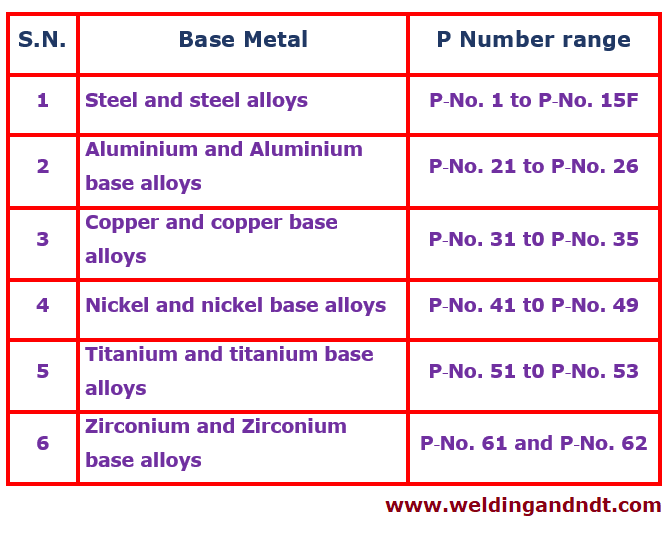 The F Number: F number grouping (for filler metals) is done to reduce the number of welding procedure specifications (WPS) and welder performance qualifications. The basis for F number grouping is usability characteristics. The usability characteristics fundamentally determine the ability of a welder to produce sound welds with a given filler metal. Hence it is assumed if a welder can make a satisfactory weld with a particular filler metal, he will be able to weld with all the filler metals belonging to that particular ‘F’ number.

Table-3 shows a brief summary of ‘F’ and filler metals (according to ASME BPVC, Table: QW-432). The A Number: Another type of grouping for filler metal or welding rod is the ‘A’ Number. ‘A’ number grouping has been done on the basis of the chemical composition of the deposited weld metal. This can be found in ASME BPVC Section IX, Table – QW-442).

Please watch the video (given below) for more clarity on this topic;

Also read: How to write a welding procedure specification